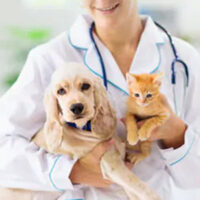 If you are a licensed professional such as a doctor, nurse, professional engineer, dentist, psychologist, real estate broker or veterinarian, it’s a good idea to stay legit and do what you can to hold onto your license. After all, your license is your livelihood. Without it, your employment options are limited and it’s hard to make a decent living.

A veterinarian in Illinois is facing licensing issues after a welfare check at her home in May 2015 resulted in multiple misdemeanor and felony charges. In July 2016, she was found guilty of aggravated cruel treatment of an animal, which is considered a felony. She was also charged with 10 misdemeanors. She was sentenced to probation for a period of two years. However, she was recently able to get the felony charge reversed.

After losing her license, the veterinarian operated a clinic out of her home in Creal Springs, IL. Her charges stem from a surgery she performed on a dog named Chief. Police officers who were performing a welfare check removed Chief from the vet’s home and he died 24 hours later.

At the home, police found deplorable conditions. Numerous animals were found in and around the home and there were animal feces everywhere. Many of the animals were covered in feces. Officers found a bag of animal carcasses in the basement. There was also no power to the home.

A bench trial found her guilty of numerous charges, including six counts of violating an animal owner’s duties, four counts of practicing veterinary medicine without a license and one count of aggravated cruelty to a pet. The vet told the judge she was treating animals in her home to earn money to defend her suspended license and feed her animals. She was trying to appeal the charges related to violations of an animal owner’s duty and the felony charge, claiming a lack of evidence, court documents say.

In early June, the appellate court decided to uphold all but one charge. The aggravated cruelty to a companion animal charges was reversed based on the fact that there was not enough evidence to prove malice. The veterinarian did not use the scalpel as a deadly weapon nor did she operate on Chief with the intent to kill him.

The other charges remain based on the condition of the woman’s home when police performed the welfare check. Given that the woman was a veterinarian, she clearly knew how to care for animals. However, she caged dogs in her basement and allowed her animals to live in feces, which are unsanitary and dangerous behaviors.

Veterinarians, like other licensed professionals, must obey local, state and federal laws and act in an ethical manner at all times. Violation of statutes and regulations can lead to fines, probation and even license loss.

If you are facing criminal charges or your license is at risk, seek legal help right away from Tampa veterinarian licensing lawyer David P. Rankin. He has many years of experience helping veterinarians and other licensed professionals hold onto their licenses. To schedule a consultation, call (813) 968-6633 or fill out the online form.