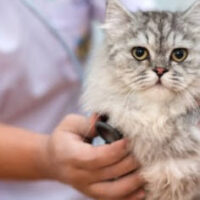 A good veterinarian has the knowledge to care for a variety of injuries and illnesses our pets face. A good vet should also have morals and integrity. They should make their vet clinic a professional place for employees to work. When they don’t, they can face ethical issues in the workplace, which can lead to criminal charges, fines and license loss.

A veterinarian in Oklahoma is facing charges of sexual assault after getting too unprofessional with his female employees. The 66-year-old man, who is part owner of Shawnee Animal Hospital, has been accused of inappropriately touching multiple victims.

The vet would ask female employees for hugs and kisses.  In one situation, he grabbed an employee’s face and pulled it toward his. He then proceeded to forcefully kiss her on the mouth.

The veterinarian would inappropriately touch the female employees. Sometimes he would go as far as lift up their shirts and touch their chests. This even happened to a 12-year-old girl who was participating in a job-shadow program at the vet clinic. The vet clinic had a call for a horse to be delivered and the two went to the house. Then the vet sexually assaulted the girl. He touched the girl’s various body parts and even told her that “this is how you have to treat women because this is all they understand.”

In another incident, the man cornered a female employee at his home. He got behind her and pulled her hair. He grabbed it, telling the woman this is how you control a horse. The man told her he was going to corral her like a hose and take her upstairs. He then touched her all over her body.

Another employee told police that the veterinarian told her that she could get a $3 raise. However, the doctor wanted to know what she was going to do for him in return.

The investigation began in October 2019. Some victims were reluctant to come afraid due to fear. The veterinarian told his employees that he has “the best lawyer” and that nothing will happen to him because he is “untouchable.” However, one person was brave enough to come forward. Others followed and spoke to police about their incidents as well.

After all, nobody is above the law, regardless of their status. The man claimed he had money and attorneys, but does not protect someone from legal ramifications. The man faces multiple criminal charges, including five counts of sexual battery, one count of lewd acts to a child and one count of battery.

We rely on veterinarians to care for our beloved pets. While an accusation of sexual assault does not determine how well a person cares for animals, it is a sign of immorality and it could lead to license loss and other penalties.

If you are facing administrative actions against your license, don’t handle them on your own. Get help from Tampa veterinarian licensing lawyer David P. Rankin. He has helped veterinarians and other licensed professionals hold onto their licenses. Schedule a consultation today by filling out the online form or calling (813) 968-6633.