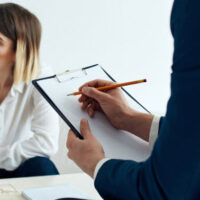 Many people struggle with mental and emotional issues that they cannot deal with on their own. They may have gotten advice from friends and family members, but the issues just cannot be resolved without professional help. That’s why many people seek help from psychologists.

People trust psychologists to act with morality. After all, expressing one’s innermost feelings is not exactly the easiest thing to do, so patients need to be comfortable with the psychologist of their choice. When psychologists breach this trust, it can have many effects. Not only is the patient harmed, but the psychologist can face criminal charges and lose their license.

This is what happened to a psychologist in Michigan. The 57-year-old man from Grand Haven was arrested on March 11 for fourth-degree criminal sexual conduct, a misdemeanor. He pled guilty to this charge and was recently sentenced to 45 days in jail. He was also ordered to pay close to $10,000 in fines and other costs.

Not many details were released about the incident. However, the arrest is related to the man’s job as a clinical psychologist. He allegedly sexually assaulted a client. The man was arrested after police conducted a lengthy investigation.

An open formal complaint has been filed against the psychologist. State records show that his license is currently suspended.

While most psychologists are professionals who take their jobs seriously and would never harm a patient, some take advantage of their patients. There have been cases of male psychologists sexually assaulting their female patients. In some cases, the victims are minors.

On top of that, having an affair can be dangerous to the patient’s health. Some end up in the hospital and attempt suicide. Those who are sexually abused by psychologists may stop functioning altogether. They may experience anxiety, depression and even post-traumatic stress disorder (PTSD).

There is a reason why Florida psychologists need licenses to practice. A psychology practice involves various tasks, including administering tests and using diagnostic tools to diagnose mental illnesses and conditions. The psychologist is then tasked with providing therapy to help the patient manage their conditions. Someone who is untrained or unprofessional can cause serious harm to patients.

Psychologists get to know their patients very well. Patients confide their innermost feelings and secrets, and as such, they need to act in an ethical manner at all times.

Any type of misconduct can lead to license loss and criminal charges. Protect your license with help from Tampa psychologist licensing lawyer David P. Rankin. David P. Rankin has helped psychologists and other licensed professionals resolve their licensing matters for more than 30 years. Schedule a consultation by calling (813) 968-6633 or filling out the online form.