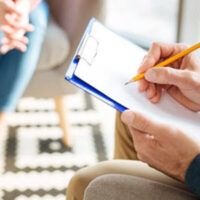 Psychologists have a hard job. They are engaged to improve the mental and emotional health of patients, which is not an easy thing to do. They are held to high standards in terms of knowledge and ethics. If they are not very well-trained, they can cause significant harm to patients. They can also face penalties such as license suspension and revocation.

The investigation began in November 2019 when law enforcement officers executed a search warrant at the man’s home. He had allegedly tried to upload electronic images to an internet provider. The files contained images of minors engaged in sexually explicit behavior.

It is unknown what caused authorities to execute the search warrant. It is also unknown if the man knew the children depicted in the images.

There are other ways in which a person can have discipline imposed on their license including license revocation. Disclosing personal information about a patient to a third party or offering services that a person is not qualified to provide can also lead to license suspension or revocation. A psychologist who makes fraudulent claims to patients or insurance companies or engages in sexual misconduct can also face license discipline. So can someone who makes misleading claims or lies to the state board about their procedures and techniques.

If you are accused of any of these forms of misconduct, it is best to take prompt action. Ignoring the situation will only make matters worse. You could face fines, jail time, license loss and other penalties. Your license is your livelihood, so do what you can to protect it. Seek legal help right away to understand your options.

If you are facing licensing issues, get help from a Tampa psychologist licensing lawyer at the Law Offices of David P. Rankin, P.A. David P. Rankin has helped psychologists and other licensed professionals resolve their licensing matters for more than 30 years. Schedule a consultation today. Fill out the online form or call our office at (813) 968-6633.