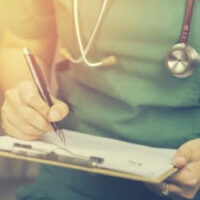 A “skin assessment” and inappropriate touching of the genitals has landed a Florida registered nurse in hot water. The 38-year-old man from Melbourne has a sexual battery charge against him after touching the breasts and vagina of a patient. The woman was admitted to the Holmes Regional Medical Center in Melbourne on April 27. She was admitted as a Baker Act patient, as she had just attempted to commit suicide. The Baker Act is a Florida law that allows people who have a mental illness and meet certain criteria to be held in a mental health treatment facility for up to 72 hours.

When the patient got to her room, the nurse and a certified nursing assistant (CNA) came into the room. The CNA later left the patient and the nurse alone together. However, the nurse lied and told police that the CNA was in the room with him. He later changed his story, saying he “assumed” she was with him. He also acknowledged the “Four Eyes” policy for such physical examinations, requiring another nurse in the room. However, the CNA did not sign the paperwork.

The nurse admitted to unbuttoning the patient’s gown and checking her breast with his gloved hand. He then pulled her underwear to the side to check her vaginal area, but did not admit to any inappropriate contact at first. He later admitted that he put the tip of his middle finger inside the woman’s vagina.

The woman was previously told that nurses could visually inspect her for anything unusual. Therefore, she was surprised when the nurse manually inspected her breasts and vagina, but no other part of her body. She even exclaimed “What the hell?” to the nurse, but the nurse instead tried to use humor to diffuse the situation. The entire situation lasted less than two minutes.

The nurse was arrested May 6. He posted a $205,000 bond on May 8 and was released from jail. Prosecutors dismissed the charge of sexual battery against a mentally defective victim, but a misdemeanor battery charge remains. The Department of Health later dropped an emergency suspension order on the man’s nursing license, which he has had since 2015.

Licensees in the medical field sometimes abuse their power and take advantage of patients. While doctors and nurses must touch a patient’s genitals for medical purposes, there are times when the touching is inappropriate.

Those accused of such crimes can face license loss, criminal charges, jail time and more. Protect your license and livelihood with help Tampa nursing license lawyer David P. Rankin. He has helped nurses and other licensed professionals hold onto their licenses. Schedule a consultation today by calling (813) 968-6633 or filling out the online form.