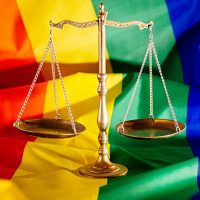 The National Association of Realtors (NAR) created a code of ethics in 2020. A complaint in Montana is the first legal test of this code. It could actually end up being a landmark legal case, as it highlights hate speech against the LGBTQ+ community.

A local resident filed the complaint over the summer. They are accusing the pastor of Clinton Community Church, who also works as a part-time real estate agent, of engaging in hate speech. The incident occurred when the pastor withdrew his church from taking part in free lunch program at the local food bank because it celebrated gay rights. The pastor claimed that promoting gay rights is against church doctrine, which states that homosexuality is immoral.

The pastor is now facing a complaint that he violated the NAR’s Code of Ethics, which promotes engaging in hate speech against someone because of their sexual orientation. He is now suing the NAR as well as the local Realtors group, stating that the code of ethics should be deemed invalid because it goes against his religious beliefs. Plus, he believes that the code of ethics is too vague to be enforced.

The man cannot be disciplined until the complaint is heard by the Missoula Organization of Realtors. This has the LGBTQ+ Real Estate Alliance up in arms, which claims that, in the meantime, the pastor should be suspended from membership in the Realtors’ group. With litigation often lasting several years, there should be no reason for the complaint against him to wait until the lawsuit is resolved. Not punishing the pastor would be unacceptable. The Missoula Realtors group had scheduled a hearing on December 2, but delayed it for the time being due to the pending lawsuit.

Under the NAR’s code of ethics, the man is allowed to express any religious belief he wants. An while an individual has the right to freedom of speech, a person cannot have anti-gay views and still work as a realtor.

The man is allowed to continue selling real estate for the time being. However, if it has been determined that he did violate the code of ethics, then he will get kicked out of the Realtors’ groups. He would then lose access to the multiple-listing service for properties, which would make it difficult for him to work as a real estate agent.

Real estate agents work with people from all walks of life. Engaging in hate speech is immoral and unethical and can lead to license suspension.

Facing administrative issues? Keep your real estate license with help from Tampa real estate sales associate licensing lawyer David P. Rankin. I have been involved in several hundred license discipline proceedings before the Florida Real Estate Commission and was the attorney for the Greater Tampa Realtors for 18 years. Fill out the online form or call (813) 968-6633 to schedule a consultation.