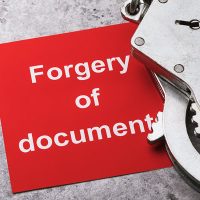 Real estate agents work with legal documents and in situations where there is a lot of money at stake. Because of this, they must act with honesty and integrity at all times. When they fail to do so, they could face various forms of punishment, such as license loss and suspension.

A real estate agent is being indicted on multiple criminal charges after he duped a client from China. He forged various documents to make it seem as though the client had bought the property. However, the real estate agent then took the client’s money and sold the home to someone else.

The 42-year-old Tennessee man tricked the client into thinking they were buying a $495,000 home. He forged the closing documents and the client sent him the money. The real estate agent, however, stole the money.

The man was arrested and charged with theft over $250,000, money laundering, and criminal simulation. He paid the $50,000 bond and is now free. On April 29, the Tennessee Real Estate Commission ordered an emergency suspension of the man’s real estate broker’s license.

Some people think nothing of signing someone else’s name on legal documents, but doing so can result in criminal charges. Forging documents involves changing or modifying documents to deceive someone. This is considered a white collar crime, which is a felony. To be charged with a crime, though, it must be proven that the person acted with criminal intent. If the person honestly did not know that the document was forged and they tried to pass it off as a true legal document, then they did not commit a crime.

Forgery may include any of the following:

A person may forge various types of documents, including tax returns, paychecks, personal checks, visas, passports, bank statements, ID cards, and birth certificates. Forgery is often done as part of a larger scheme, such as embezzlement or tax evasion. While forgery can be committed by individuals, sometimes large corporations engage in it as well for financial gain.

In Florida, a person convicted of forgery may face five years in prison and a $5,000 fine, as well as five years of probation. A person could also lose their job and may be ordered to pay restitution to victims.

Real estate agents and brokers, like all licensed professionals, must act with honesty at all times. Forging documents, deceiving clients, and stealing money are all actions that can cause a person to face punishment.

Are you facing license loss or some other punishment? If so, seek legal help from Tampa real estate broker license lawyer David P. Rankin. He has been involved in several hundred license discipline proceedings before the Florida Real Estate Commission and was the attorney for the Greater Tampa Realtors for 18 years. Schedule a consultation by filling out the online form or calling (813) 968-6633.