Nurse’s License Suspended for Writing Prescriptions for Herself 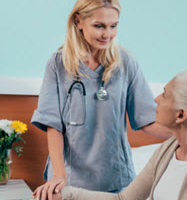 Many people are interested in obtaining prescription drugs. While many people sell them to make a profit, most use them for themselves to relieve pain caused by medical conditions and injuries. Many professionals in the medical field have access to a variety of drugs and often take steps to obtain them for themselves. This is often done, however, without a legal prescription. The penalties for engaging in such an activity can be serious, resulting in license loss and revocation.

A nurse from Tennessee had her nursing license suspended after it was discovered that she wrote more than 100 prescriptions to herself. She used a doctor’s prescription pad to write 104 prescriptions for a total of more than 110,000 pills. To obtain these medications, the nurse used blank, pre-signed slips that were intended to be used for patient refills. Over a three-year period, she wrote prescriptions for 2,880 pills of Soma, a muscle relaxant, and 8,764 pills of hydrocodone, a potent painkiller. Both drugs are considered to be highly addictive.

The nurse has been employed at Highston Orthopedic Clinic since 2002. She started obtaining the medications in 2014 and continued until she was caught in 2017. She was fired in October 2017 and her license was suspended in August 2018. She does not deny writing the prescriptions. In fact, she admitted signing all the prescriptions.

The Tennessee Board of Nursing found the woman to have a drug addiction that interfered with her nursing duties. She was also found to be dishonest and guilty of unprofessional conduct that could compromise her position as a nurse. The good news is that while the nurse’s license is currently suspended, she has an opportunity to get it back. She can enroll in the Tennessee Professional Assistance Program, a program that serves to aid medical professionals who struggle with addiction. Upon successful completion, she may be eligible to get her nursing license back.

The woman’s attorney, however, does not believe that the nurse is at fault. The attorney claims that the nurse used the medication to treat pain she experienced from a surgery. He also understands the issue to be a “he said, she said” situation where a doctor allegedly told the nurse that she could use the pre-signed prescription pads. However, the doctor denies that claim.

Nurses have a duty to provide care to sick or injured patients. Some nurses, however, take advantage of their rights and engage in activities that are unethical.

Many licensed professionals in the medical field abuse their right, especially when it comes to prescription drugs. Prescription drugs are often easy to obtain, but they are done so illegally, leading to suspended licenses and other penalties. Let The Law Offices of David P. Rankin, P.A. assess your case. He can help resolve disciplinary matters and help you keep your license so you can continue to make a living. Schedule a consultation by filling out the online form or calling (813) 968-6633.