Nurse Justified For Quitting Nursing Home Due To Unsafe Conditions 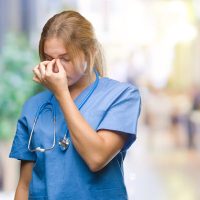 Many people lost their jobs during the COVID pandemic. While many were laid off, a lot of workers also quit due to poor working conditions. The pandemic has made it hard for numerous companies to find workers, and this makes it difficult for employees who stay with a company and have to take on double or even triple the workload.

This was what happened to a nurse in Iowa. The nurse, concerned about staffing levels, left her job in March 2021 because of the unsafe and illegal environment. She even had fears about losing her nursing license.

The woman had worked at Montrose Health Center since 2018.  In 2020, the nursing home was purchased by Montrose Health Center Operations. Before the purchase, two licensed nurses were assigned to work the floor at any given time, But after ownership changed, staffing was cut back, leaving just the one nurse on staff and doubling her workload.

The nurse filed several complaints about the nursing home’s operations. One was about decaying treatment in a stroke victim. Another was about patient abuse.

In February 2021, the nurse discussed staffing levels with her employer. The higher-ups promised to increase staffing, but never did. The final straw was on February 20, when the nurse was assigned to care for 36 residents. Three had sustained falls that day. The nurse was concerned because she was required to perform periodic neurological checks on each of the three residents as well as provide care for the 33 others.

The nurse was scared because she felt as though the work overload could put her nursing license in jeopardy. A week later, she resigned. She applied for unemployment benefits, and while the nursing home challenged the decisions, a judge ruled that she was entitled to unemployment benefits, despite voluntarily leaving her job.

The reason was that the judge found the nurse’s working conditions intolerable. Based on the incidents occurring at the facility, it was reasonable that she found the situation unlawful and unsafe.

That wasn’t the end of it. It was also determined that the nursing home failed to mitigate the spread of COVID-19 by placing negative and positive residents in the same room. The administrators also allowed employees who tested positive for COVID to cover shifts because it became so difficult to find workers. Inspectors claimed that the facility had put residents in “immediate jeopardy.” There has been talk about fines, but nothing has been imposed yet.

Nurses have a tough job and some situations can put their license in danger, as seen in this case. Having to take on too much responsibility brings about health and legal concerns.

If you are facing license suspension or revocation due to circumstances beyond your control, Tampa nursing license lawyer David P. Rankin, P.A. can help. He has decades of experience helping nurses and other licensed professionals keep their licenses. Schedule a consultation today. Fill out the online form or call (813) 968-6633.