Not Paying Your Student Loans? You Could Lose Your Professional License 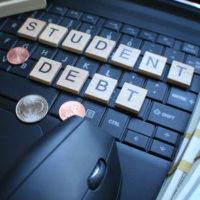 When times get tough, many people cut back on paying bills. They have to prioritize which bills are most important. For most, food, mortgage payments and electricity are more important than repaying student loans. But those with a professional license may want to rethink this.

Many people take out student loans to further their education—and their careers. But this same student loan could put a person’s career in jeopardy if not paid back on time. Twenty-two states—including Florida—have the authority to suspend or revoke the professional licenses of those who refuse to pay back their student loans.

Creditors have used other forms of punishment in the past, but are still seeing high numbers of defaults. Many have resorted to lawsuits, liens, wage garnishments, seizures of tax refunds and driver license suspensions. Now they are becoming aggressive and going after professional licenses. Without these, a person cannot make a living.

This means that teachers, lawyers, real estate brokers, psychologists, nurses and other professionals who require a license to do their job can no longer do their job due to state laws. This is counterintuitive. It becomes a Catch-22 situation because people are losing their licenses for not paying their debts, yet a person cannot pay their student loan debts if they do not have a license to work.

It is unknown exactly how many people have lost their licenses due to this practice, but public records requests have identified at least 8,700 cases. This is much lower than the true number.

The practice of suspending a person’s professional license is in the interest of taxpayers because the state or federal government is responsible for the debt if the borrower defaults. States believe that when a person is facing possible license loss, he or she will find the way to get the money.

By the late 1980s, the government lost more than $1 billion in student loans. Since other methods have not worked to persuade borrowers to repay their loans, license loss is used as a last resort by lenders who are tired of not getting repaid for loans. It’s certainly a way to get a borrower’s attention.

Besides professional licenses, some states also prohibit those who have defaulted on student loans and other debts to renew their driver’s licenses or buy hunting or fishing permits. This has worked for South Dakota, which received $3.3 million in repaid debts in the past year.

Keep Your License with Help From a Tampa Professional Licensing Lawyer

Even if you perform your job duties in an ethical manner, you could lose your professional license by not paying your student loans. If you lose your license, you can’t work and earn money to pay your bills. Don’t let this fate happen to you.

If you are behind on your student loan payments, The Law Offices of David P. Rankin, P.A. can help you keep your license so you don’t have to worry about your financial future. I am a Tampa administrative lawyer who represents licensed professionals. For a free consultation, contact my office today by calling (813) 968-6633.