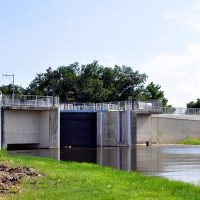 The United States has seen a lot of extreme weather issues this summer, from wildfires to tornadoes to hurricanes to droughts to floods. These events can cause a lot of damage and if buildings, bridges, and other infrastructures cannot defend themselves from the damage, they can become easily destroyed.

That’s why we depend on professional engineers to help create safe, strong, and durable buildings. However, this is easier said than done. Civil engineers must follow the rules but also rely on ethics. They must put the safety and welfare of the public in mind. If they don’t, then the state board can take action, imposing hefty fines or even suspending or revoking the professional engineer’s license.

While professional engineers can make no guarantees about the safety of a structure in several hundred years, many do take into consideration the 100-year storm—the rare event that has a 1% chance of occurring every year. However, this standard doesn’t work for every situation. There are some major cities, such as New Orleans, that have been hit hard by disasters in the past. There was Hurricane Katrina in 2005. In August—16 years later—the area was then hit by Hurricane Ida.

That’s why when new flood barriers were created for New Orleans, professional engineers didn’t just go by the book. They used statistics to get a better idea of what would be required to protect the city the next time around. By fudging some numbers a little, they saved the city and prevented serious damage.

In 2006, after Hurricane Katrina ravaged New Orleans, the U.S. Army Corps of Engineers’ (USACE) coastal program was assigned to determine the threat that future storms would pose to the area. They soon realized that creating buildings based on a 100-year storm would not be safe enough. They estimated that there would be a cumulative 26% probability of such a storm hitting in the next 30 years. Over the course of 65 years, it would be about a 50/50 chance. The likelihood of a 100-year storm would increase over time due to climate change.

So the professional engineers acted conservatively. For example, some variables, such as ocean waves, were factored in twice. This resulted in extra layers of protection, such as a levee built with a few extra feet of clearance. And it worked. If the civil engineers had designed the system for a 100-year storm, it would have failed when Hurricane Ida hit. Countless lives could have been lost.