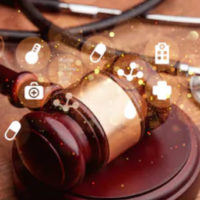 Nurses are no strangers to the human body and they often see patients in compromising positions. It is not uncommon for nurses to see breasts, buttocks and even genitals. However, when doing so, they must act in a professional manner. While medical professionals may find certain patients attractive, they cannot act sexual toward patients for any reason or they could risk license suspension or revocation.

Even communicating with a patient through social media can have negative effects. A Florida nurse recently has his license suspended after inappropriately discussing a patient’s genitals on Snapchat.

The 41-year-old registered nurse from Lake City is facing allegations of obscene communication and cruelty toward a child after sending lewd Snapchat messages to a 15-year-old male patient. The Department of Health ordered an emergency suspension of the man’s nursing license after the communication that transpired after the boy saw the nurse for a school physical. The boy had been a patient of the nurse at Magnolia Pediatrics for three years.

During the physical, the nurse held the boy’s penis and stared at it. This made the boy feel uncomfortable. His mother brushed it off at first, since that part of a physical can be uncomfortable for any box. However, after her son suffered a shoulder injury a few months later, he visited the nurse again. He gave the nurse his cell phone number to receive the results of an MRI, and his mother decided to take matters into her own hands and see how the nurse would react.

The boy received the results of his MRI through text message. The nurse continued to communicate with the boy through Snapchat. The boy’s mother told him to continue chatting with the nurse while she set up her own undercover sting operation of sorts. Because Snapchat messages disappear quickly, the mother took photos of the messages sent between her son and the nurse.

The messages were lewd in nature, alluding to the boy’s penis size. They included “Below your waist…it’s really big” and “Like lol r u for real a white dude below the waist.” The police were alerted and investigators took over the conversation. The nurse asked the undercover officer for oral sex. The nurse then sent an image of an erect penis covered by underwear.

The nurse was arrested on May 14. His registered and advanced practice nursing license, which he held since August 2000, was placed under emergency suspension. He was placed in Columbia County Jail.

Nurses are supposed to act in an ethical manner when dealing with patients. Any type of sexual misconduct is dealt with by the Florida Department of Health and the Board of Nursing very quickly and often results in a summary suspension of the license.

Such an incident can cause a person to lose their professional license permanently. Contact the Tampa nursing license lawyer David P. Rankin to protect your career. He has helped nurses and other licensed professionals manage administrative issues and hold onto their licenses. Schedule a consultation by filling out the online form or calling (813) 968-6633.