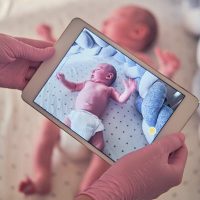 Many people use social media to post photos. However, some things shouldn’t be posted on social media, as a Florida nurse is realizing. The nurse was fired after mocking and posting photos of a baby born with a congenital disorder. It is unknown if she will have her nursing license revoked.

The neonatal intensive care nurse from Jackson Memorial Hospital in Miami shared images of a baby with gastroschisis on social media. Gastroschisis is a birth defect affecting the abdominal wall. It occurs in early pregnancy and causes the baby’s intestines to form outside of the baby’s body. It has become more common among young mothers.

The nurse has posted two photos of the baby as well as several photos of herself on the job. As soon as the hospital became aware of the privacy breach, the nurse was placed on administrative leave. Jackson Health Services is taking the breach seriously, as employees go through privacy policy training. After conducting an investigation, the nurse was fired on September 15. While the next steps for the nurse are unclear, it is possible that her license would be revoked.

Under the disciplinary guidelines for the Florida Board of Nursing, nurses who are unsafe or pose a danger to the public may be fined or suspended. In severe cases, their licenses may be suspended or revoked. If a nurse’s license is revoked in Florida, it is recorded in a database, allowing nursing boards in other states to have access to that information.

Breaches happen all the time in the medical field. While medical staff are to go through annual training, and federal law mandates patient confidentiality, breaches in patient confidentiality still occur. And that’s to be expected. Given the fast-paced environment of the healthcare industry, it would be unrealistic to expect zero breaches to occur. When nurses are doing their jobs properly, they should not be concerned about breaches.

So what happens when a breach does occur? If a nurse becomes aware of a breach, it should be reported under HIPAA laws, whether or not it was an accident. Typically, the nurse manager or a facility compliance officer should be informed.

The nurse should not, however, notify the patient about the breach. This is typically done by the hospital’s legal department. They can handle the investigation and determine the next steps, which may include firing the nurse.

Nurses need to be careful about what they post on social media. They have a duty to follow privacy laws and when they breach confidentiality, they can be fired from their job and even lose their license.

If you are a nurse facing disciplinary action, let Tampa nursing license lawyer David P. Rankin help you with your case. I can help you resolve your matters so you can continue practicing nursing or another profession. Schedule a consultation by filling out the online form or calling (813) 968-6633.