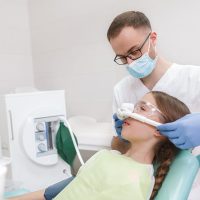 In the past few years, the news has been inundated with stories of children who have died while undergoing dental treatment. It seems as though these cases involved the use of anesthesia for dental procedures such as cavity fillings, tooth extractions, and root canals. These cases have alarmed parents as well as lawmakers.

In one case, a teen died while getting her wisdom teeth removed due to the dentists not monitoring her anesthesia. In another, a 4-year-old boy died while sedated for an oral procedure. In yet another case, a 3-year-old girl suffered a heart attack and died while under anesthesia for a root canal. That dentist was charged with manslaughter. In 2016, a 14-month-old girl underwent general anesthesia to fix two cavities. She died after her heart and breathing stopped. Her parents found no evidence of cavities on her X-rays and they sued the dentist.

While these cases are rare, they were serious enough to force the American Academy of Pediatric Dentistry (AAPD) to issue new guidelines for dentists who use general anesthesia to sedate children for procedures. Under national guidelines, certified anesthesiologists and trained emergency response specialists must be present in dentists’ offices whenever children are put under sedation. Each state dental board also has specific guidelines for dental sedation.

Still, that’s not enough for some. Patient advocates claim that more needs to be done to evaluate the risks. There are not a lot of national regulations in place, and general guidelines vary from one state to another.

Why are so many children being sedated? Going to the dentist is nerve-wracking for people of all ages, especially children. To calm them down, dentists will often use a liquid sedative or laughing gas. The children feel less anxious and the dentist can do extensive work.

However, there are risks involved. In some cases, children may fall into a much deeper level of sedation than intended. If they aren’t being monitored, they could stop breathing or even die. That’s why dental staff need to keep track of the patient’s vital signs and quickly recognize an obstructed airway or heart problem.

For sedation to be safe, certain protocols must be followed. Plus, many factors must be weighed to determine if it is safe for the child. Sedation ranges from minimal to moderate to deep to general anesthesia. Dentists need to consider that their offices don’t have the experienced level of staffing like a hospital does, so they need to be prepared if trouble strikes.

Dentistry can be complicated, especially when sedation is involved. Many children have died during sedation, so dentists need to be aware of the risks involved. It’s not a simple process.

Get the legal help you need from a Tampa dentistry license lawyer from The Law Offices of David P. Rankin, P.A. I can advocate on your behalf and assist you in resolving issues relating to your license. Fill out the online form or call (813) 968-6633 to schedule a consultation.