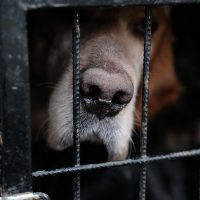 Animal rescue organizations are in place to, as the name implies, rescue animals. Unfortunately, sometimes the care the rescued animals receive is not what we would expect. They are sometimes abused, neglected, and left for dead.

An animal rescue director and a veterinarian in Colorado are facing charges of animal cruelty after leaving five dogs suffering in pain. Sadly, three of the dogs had to be euthanized.

The director of New Hope Rescue has been found guilty of one count of animal cruelty and is facing potential jail time. She was charged with five counts in total. Three were dismissed and she was acquitted of another charge. The director is scheduled for a sentencing hearing in November. She could face one year in jail and will never be able to operate an animal rescue in the state again following the conviction.

New Hope Rescue had its license suspended in Colorado in November 2021 after The Humane Society of the Pikes Peak Region (HSPPR) seized five dogs from the rescue just two months earlier. According to Colorado Animal Law Enforcement, the director failed to provide adequate vet care to the dogs, causing them to suffer.

All the animals suffered from a poor treatment. Three of those five dogs had to be humanely euthanized. Two were transferred to other rescue partners within the state for treatment.

Two weeks later, the El Paso County District Court issued a permanent injunction ordering New Hope Rescue to refrain from operating as a pet animal facility. The rescue organization was ordered to surrender its 36 animals to the authorities.

While the director has been punished and can no longer operate the rescue organization, New Hope Rescue’s vet is still licensed to work in Colorado. However, he faces five counts of animal cruelty from his work at New Hope Rescue. His trial has been scheduled.

There are many animal rescue groups out there and not all are doing a good job of saving the lives of animals. Unfortunately, some groups that claim to be helping animals are actually hurting them. A lot of them hoard animals and force them to live in deplorable conditions.

Keep Your License With Help From a Tampa Veterinarian Lawyer

Those who work in the veterinary field need to have the best interests of animals in mind. Providing inadequate care and abusing animals can lead to license loss and other penalties.

Are you facing administrative issues with your license? If so, contact a Tampa veterinary licensing lawyer from The Law Offices of David P. Rankin, P.A. I have helped many licensed professionals with their cases. Fill out the online form or call (813) 968-6633 to schedule a consultation today.