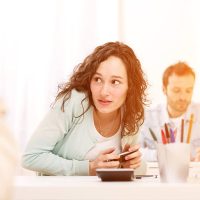 Those looking to become a certified public accountant (CPA) need to take an exam in order to get their professional license. When people go in to take their exam, there are strict rules that must be followed. If they don’t follow these rules, they can get kicked out. They will lose the chance to get their license, plus they may face other penalties.

It’s important to act in a professional and ethical manner when taking any type of licensing exam, but the rules can be especially strict for CPAs and others in the financial industry. Here are some rules you need to follow so you can succeed.

Be sure to read the rules ahead of time. Read the Candidate Bulletin so you know what items and behaviors are prohibited. If you are an exam candidate at a Prometric Testing Center, this is very important. If you are testing at any other center sponsored by the National Association of State Boards of Accountancy (NASBA) or American Institute of Certified Public Accountants (AICPA), be sure to follow all instructions given to you. You could get kicked out of a test center if you engage in any unethical or prohibited behavior.

What’s Not Allowed in the Testing Room?

Avoid bringing the following into the testing room:

Obviously, cheating is not allowed on the CPA exam. This is monitored by audio and video recordings. Test center proctors are trained to watch for unusual behavior during exams. Here are some true stories of unprofessional conduct in testing centers:

When a person engages in misconduct, they may first receive a warning from test center staff. They will then have the prohibited item confiscated. They could then be expelled from the test center, making their exam scores invalid. The testing center could also pursue civil or criminal charges in extreme cases.

CPA exams need to be taken seriously. Attempting to cheat or acting rude toward the test proctor can result in ethical issues and penalties.

Accountants need to do what they can to maintain their license. If you are facing administrative issues, contact a Tampa certified public accountant licensing lawyer from The Law Offices of David P. Rankin, P.A. for legal help. To schedule a consultation, call (813) 968-6633 or fill out the online form.